The back of the Messier Observer’s Planisphere includes several tables and observing aids that will come in handy on the observing field. Here, we will briefly cover each printed element and describe its use. 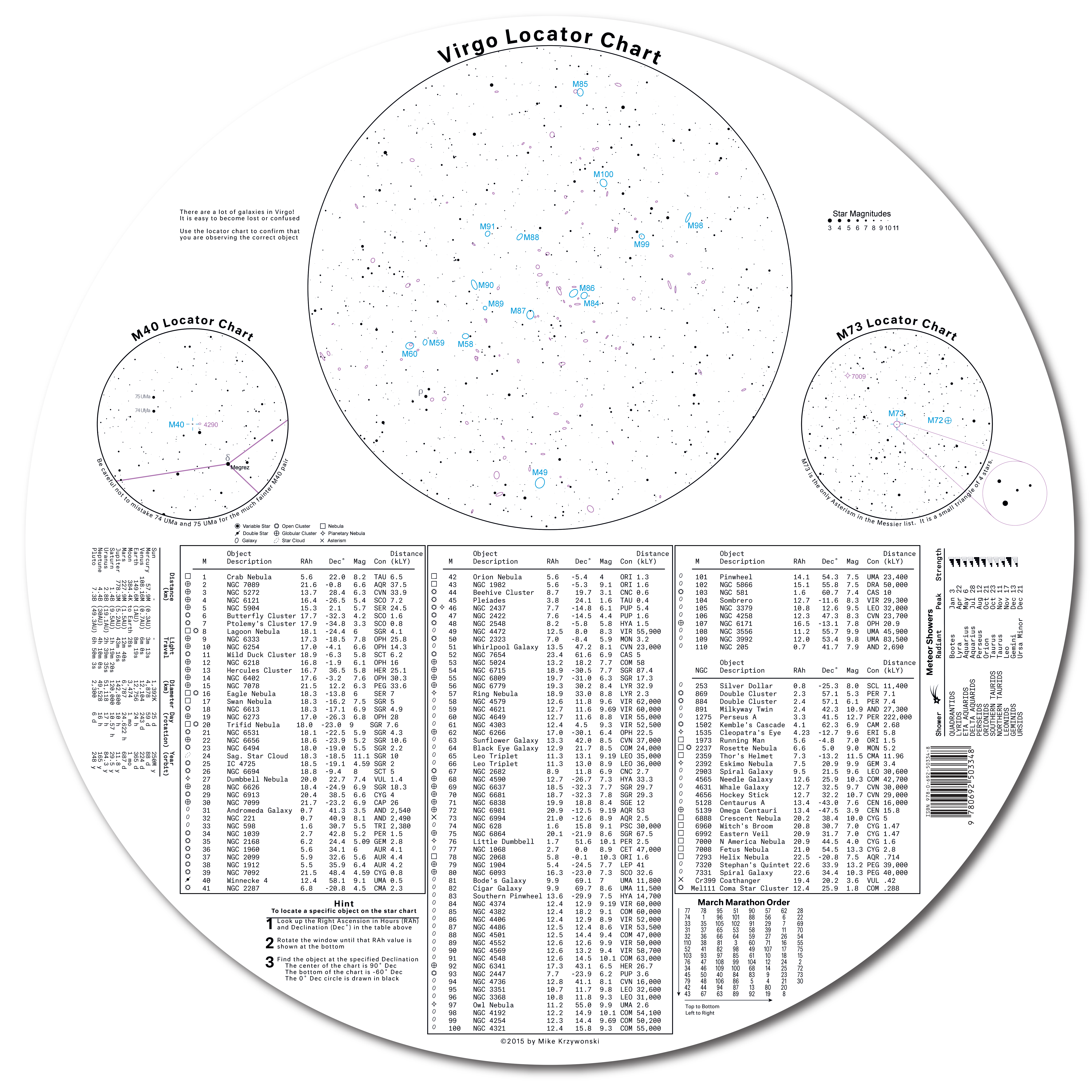 Filling the lower half of the rear side of the planisphere you will find a large table divided into three rectangular boxes. This table lists all 110 of the objects in the Messier catalog, plus a few other notable deep sky objects. The objects are listed in their catalog order from 1 to 110. The common name or NGC number of each object is also listed to the right of the catalog number. Symbols printed to the left of the catalog number indicate the type of object. A legend is printed above the table identifying each symbol. Additional information listed for each object includes Right Ascension (RAh) and Declination (Decº). These are the celestial coordinates of the object. See Celestial Coordinates to learn how to use this information to quickly find an object on the planisphere’s star map. The table also includes the magnitude (Mag), or brightness of each object. The brightest stars in the sky are around magnitude 0, the dimmest stars visible to the naked eye are around magnitude 6. Lower magnitude numbers are brighter, larger numbers are dimmer. Objects with large magnitude numbers will require a telescope or binoculars to be visible. Each entry also lists the constellation (Con) in which the object can be found, as well as the distance to the object in thousands of light-years (kLY).

On the left side of the back panel you will find a small table listing the Sun, Moon, and planets. For each planet, its distance from the Sun is listed in kilometers (km) and in Astronomical Units (AU). One astronomical unit is the distance from the Earth to the Sun. The distance from the Sun is also represented as Light Travel time. For the moon, distances shown are relative to the Earth rather than the sun. Observers with the 2015 printing of the Messier Observer’s Planisphere may notice an error in this table. Can you spot it? (Hint: light traveling from the Moon to the Earth takes about 1.28 seconds to make the journey.) The table also lists the diameter of each planet, the length of its day (1 rotation about its axis), and the length of its year (the time to complete a full orbit).

On the right side of the back panel you will find a Meteor Showers table. Meteor showers occur when the Earth traveling in its orbit around the sun passes through the trail of dust and debris left by a comet. Dust particles burn up in the Earth’s atmosphere, appearing as ‘shooting stars’ or meteors. The table lists the name of each shower, the date when the shower is at its peak each year, and the relative strength of meteor activity associated with the shower. The table also lists the Radiant for each shower, which is the constellation from which the shooting stars appear to originate. The Radiant corresponds to the direction that the Earth is traveling through space when it plows into a comet’s dust trail. 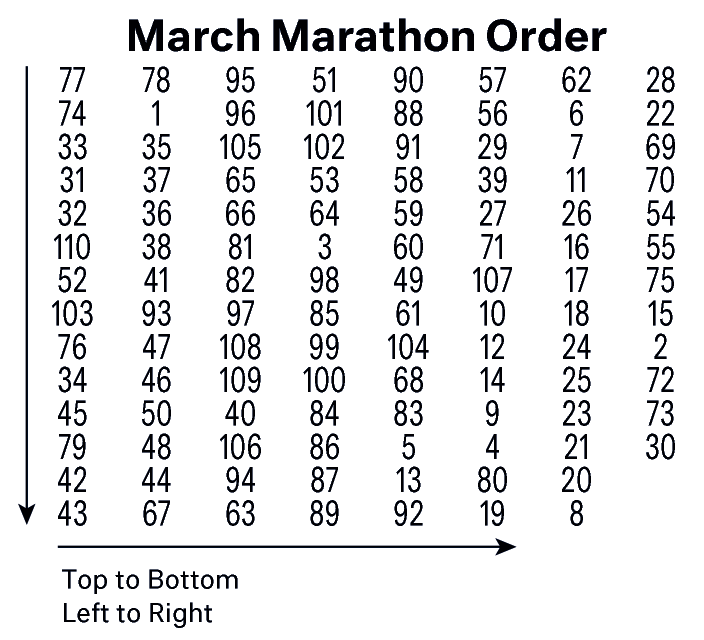 Every year around the March new moon, astronomers around the world gather to participate in the March Messier Marathon, where they attempt to observe as many Messier objects as possible in a single night. Only at this particular time of year is it possible to view all one hundred ten of them in a single night, and only if conditions are perfect. When participating in a marathon, it is important to start with a plan. It would be easy to miss an object that sets early in the evening and not have a chance to see it again before sunrise. On the lower right of the back panel of the Messier Observer’s Planisphere is a small table listing a suggested sequence for viewing the Messiers during a March marathon. Start at the top left, working top to bottom, left to right. I wish you clear skies and lots of success!

On the upper half of the back panel you will find three locator charts, similar to those on the front. These are designed to serve as an aid to viewing some more challenging objects. 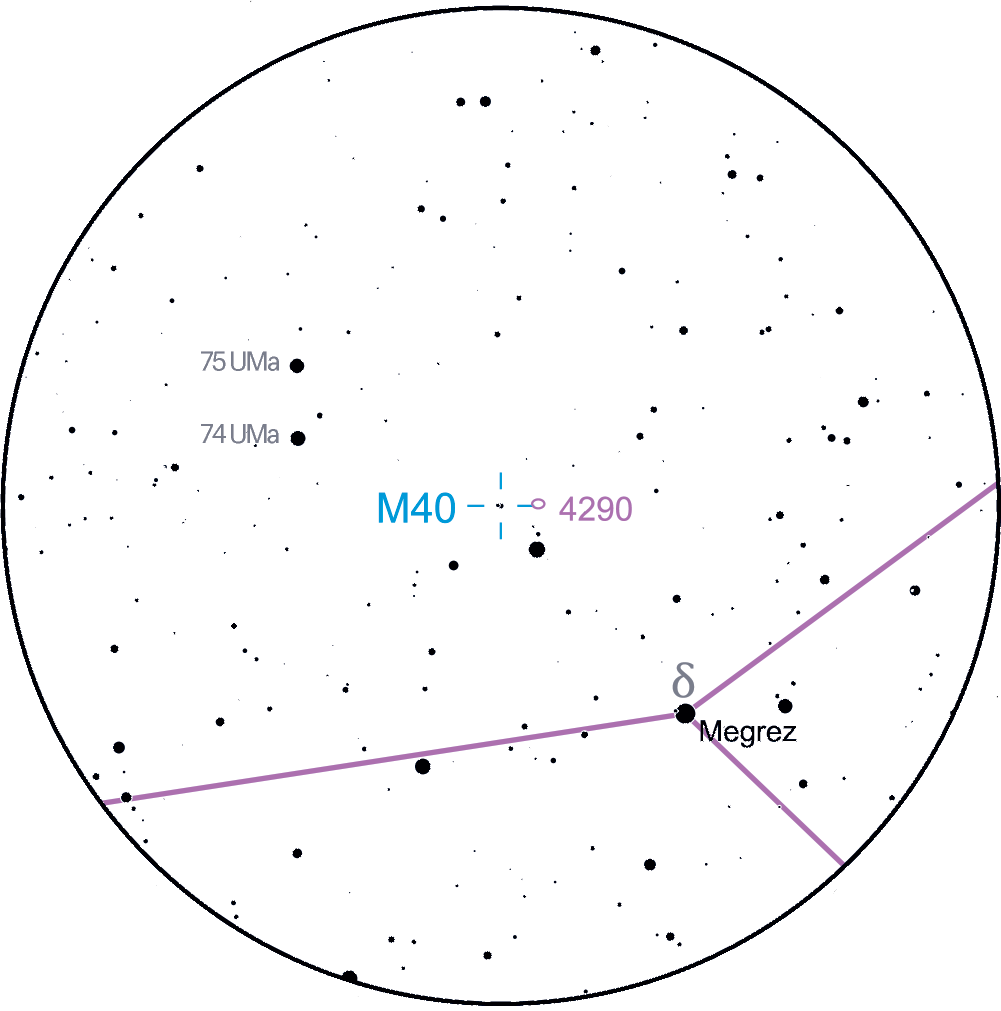 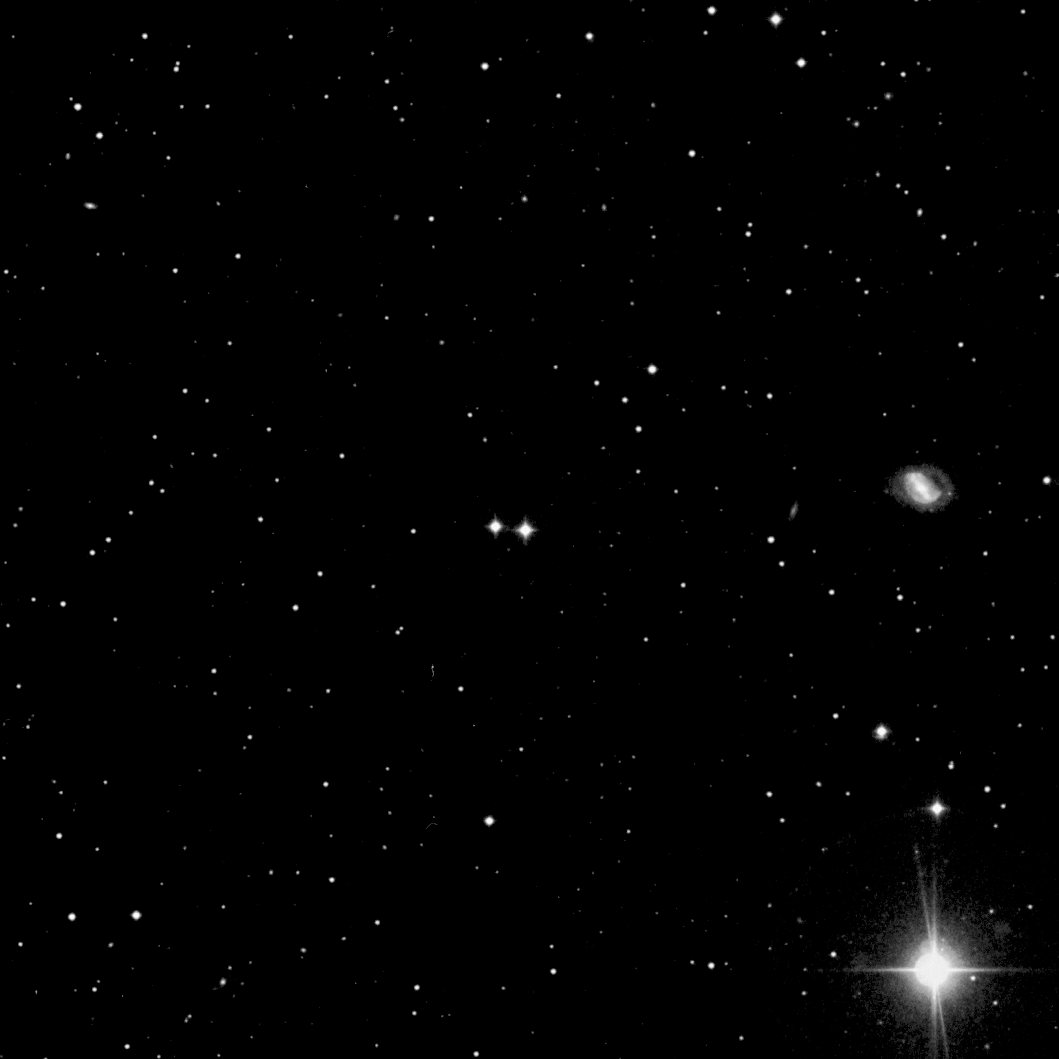 M40 is the only double-star listed in the Messier catalog. Messier presumably must have observed some nebulosity around this pair of stars to have included it in his catalog. But, to my eye, any cloudiness is certainly not conspicuous if it is there at all. Unlike all of the other objects in his catalog, this one does not stand out as different from the surrounding stars in the eyepiece. Therefore, it would be easy for the amateur observer to confuse any interesting pair of stars in the general area for this object. I, myself may have recorded an observation of the wrong stars on my first attempt when working towards my Messier certificate. This locator chart can help you avoid making the same mistake. 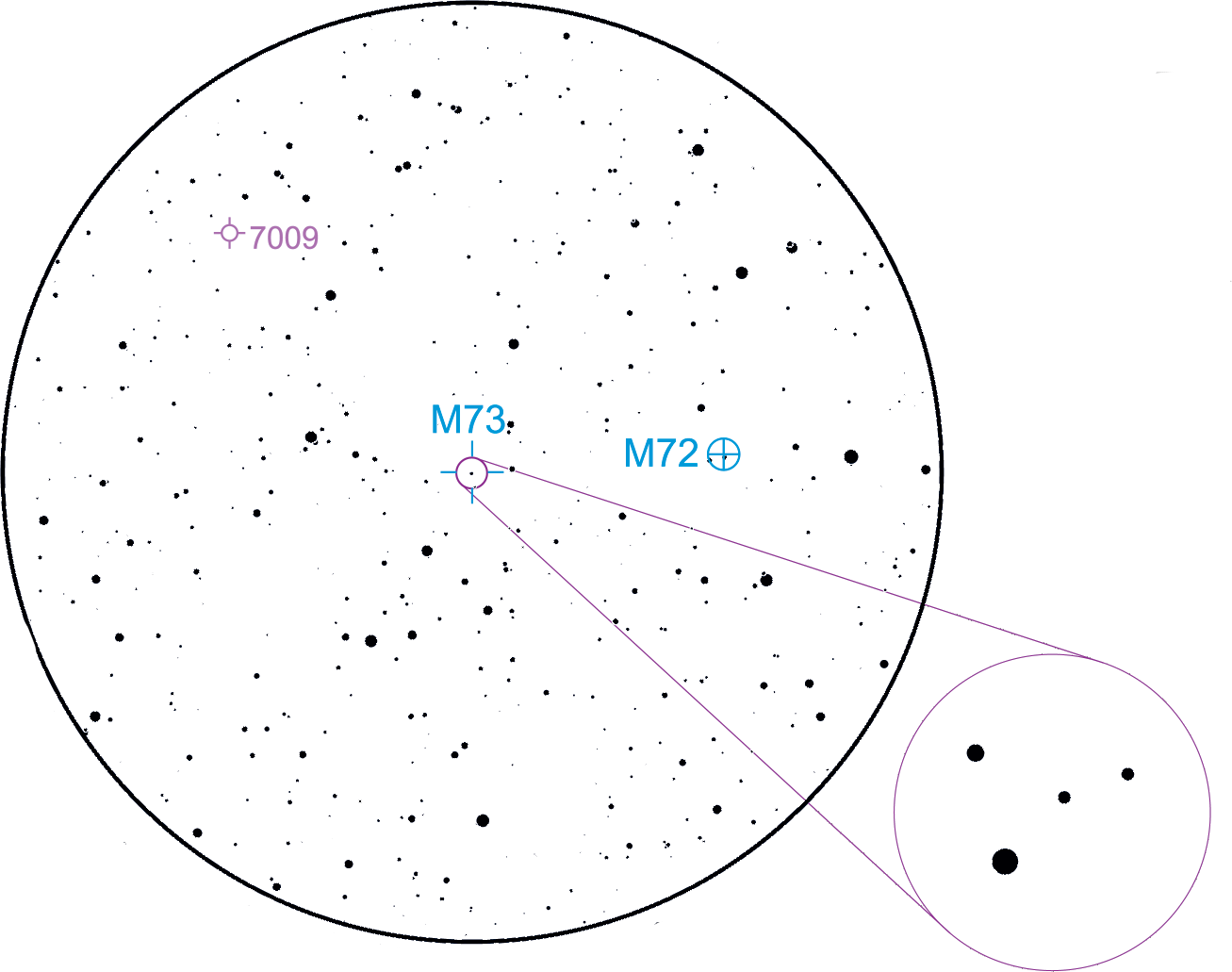 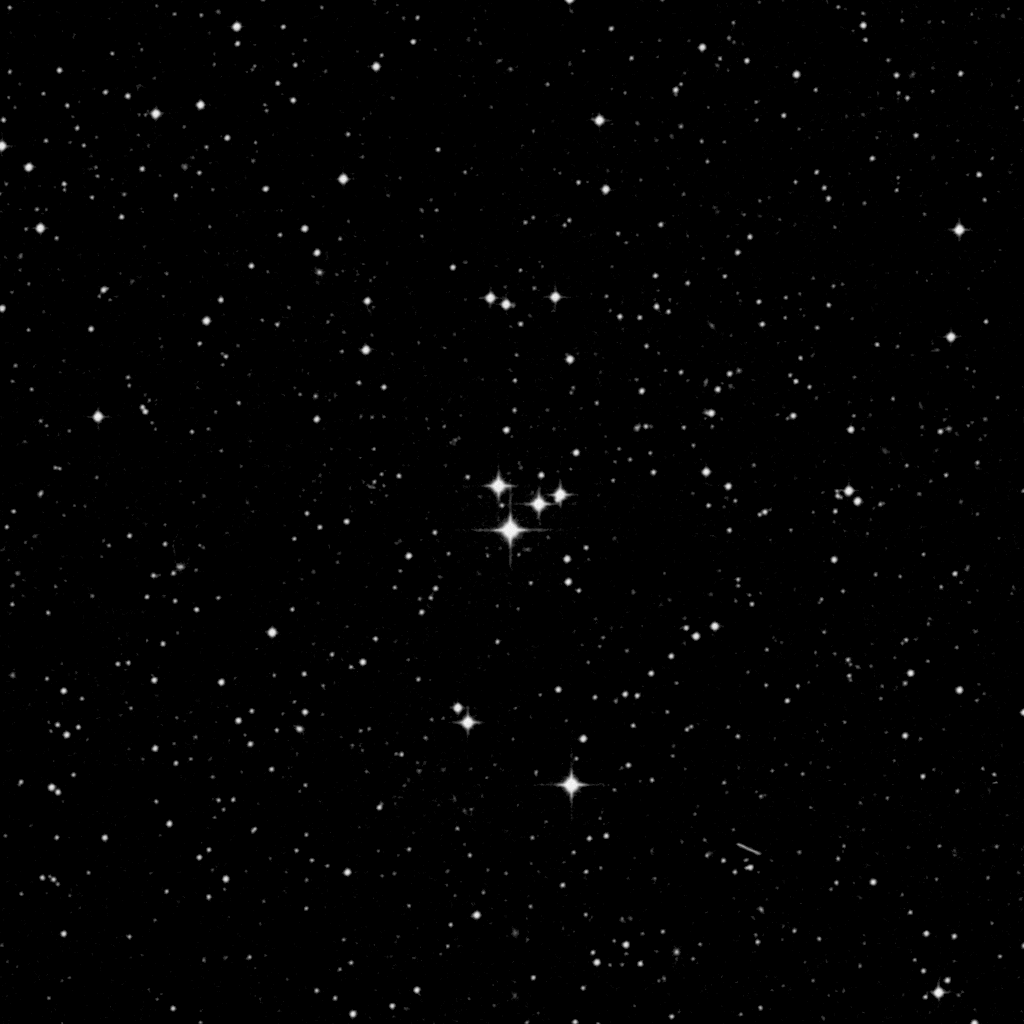 Like M40 above, M73 is another oddball in the Messier catalog. It is an asterism, a small grouping of stars that form an interesting shape or pattern. Use the inset from this locator chart to match the pattern to what you see in the eyepiece.

I remember the first time I attempted to observe the Virgo galaxies. It was during the March new moon and I was at a friend’s ranch in the country attempting a solitary March marathon with my telescope set up out in a cow pasture. Conditions were good, but it was a very cold night. Trying to keep pace and complete the marathon, I quickly made an attempt at each object. The first Virgo galaxy on my list seemed easy, I pointed the scope towards the designated part of the sky and started scanning about, looking for something out of place. Pretty quickly, a galaxy jumped out at me from the black background. Success!, I thought. On to the next object. It was in the same part of the sky so I pointed the scope near the same point and started looking. Then the truth started to dawn on me, there were galaxies strewn everywhere across this patch of sky! I couldn’t tell one from another. I struggled a while longer using the charts I had brought with me, but they were not detailed enough for the task. So, I finally moved on to other easier objects. I eventually ended the night cold and defeated. The next time I attempted Virgo, I was prepared with a better map of the region. I eventually attached that map to the back of my planisphere with packing tape so I would have it handy every time I ventured out to observe. The idea for this Virgo locator chart was born. 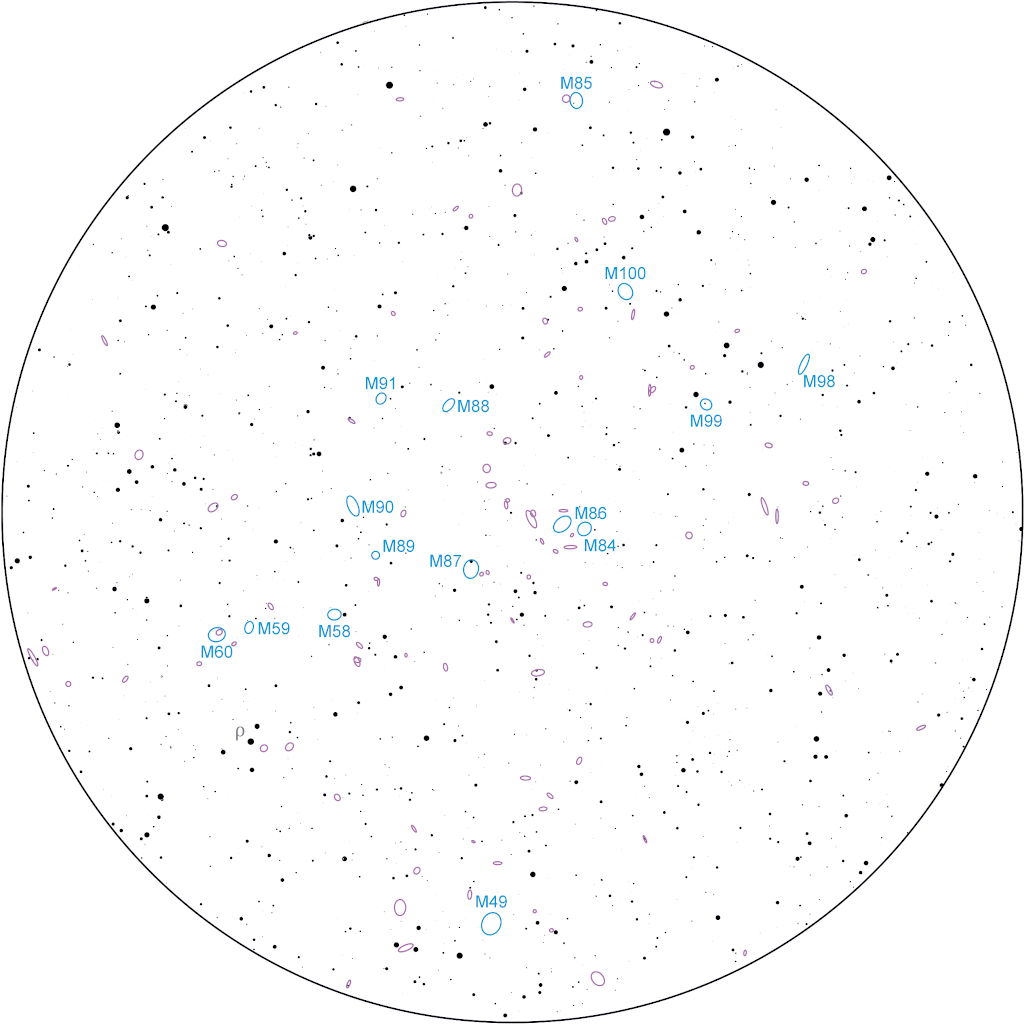 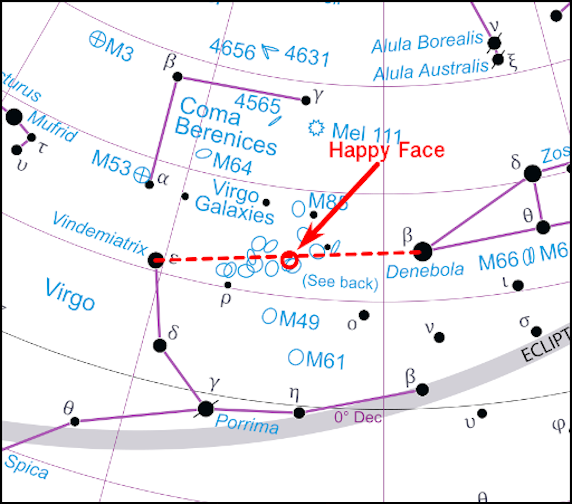 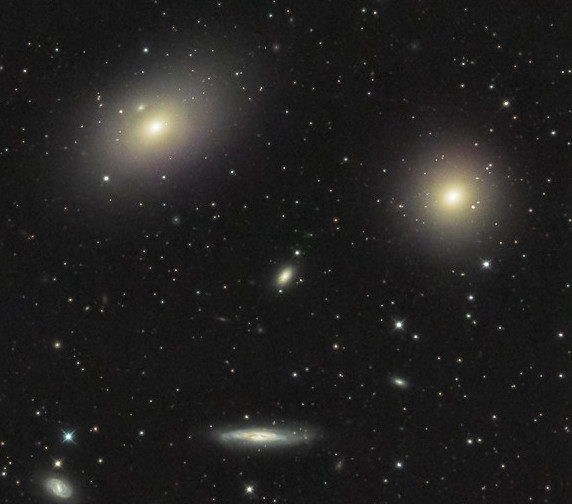 I have found that a good approach to observing galaxies in Virgo is to start at M84 and M86, which alongside two other prominent galaxies form a ‘smiley face’ in the sky. Finding this happy face is simple and repeatable. Imagine a straight line on the sky running from the star Vindemiatrix (ε) in Virgo to Denebola (β) in Leo. Point your telescope towards the midpoint on this line, halfway between these two stars. Put in a low power eyepiece and start exploring the area. A new friend will be smiling back at you! Once you can reliably find your way to this point, it can serve as an anchor or starting point as you galaxy-hop to the other objects on the locator chart. Continue by following Markarian’s Chain, a trail of galaxies that stream from M84 and M86 in a long arc leading toward the large spiral galaxy M88. After you can reliably hop your way from the anchor point to M88, you will have the skills to start hunting for the other Messier galaxies shown on the chart. It takes a bit of practice, but you will soon be an expert! Be sure to show off your skills at the next March marathon.